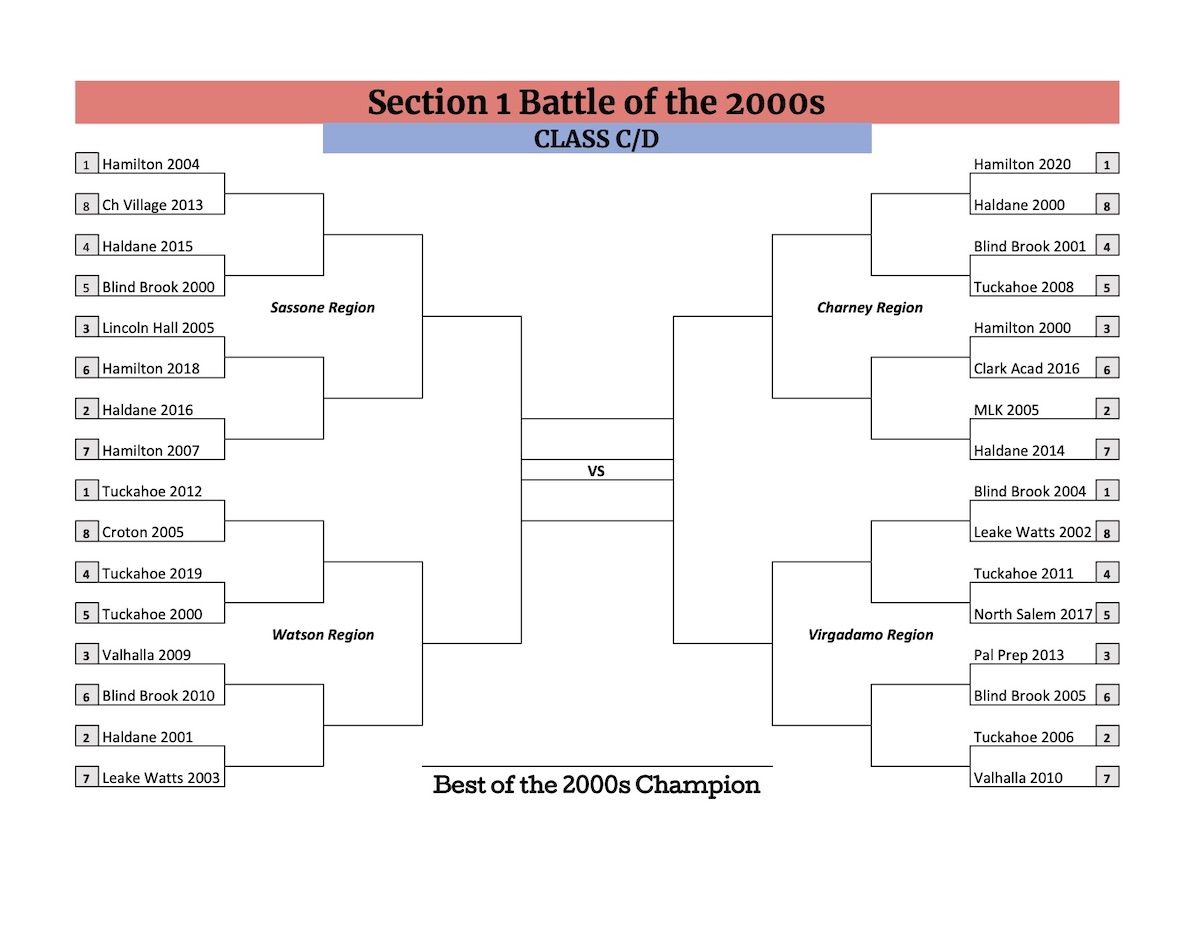 The Section 1 SuperBracketology Tournament, presented by KDJ Media and LocalLive Networks, is here. Our journey to decide the best boys basketball team in each class is since 2000 can begin.

Next up: Class C and D. We combined the small schools bracket into one, although we are giving extra automatic bids to the Class D schools that won section titles from 2000-2003. Blind Brook, Hamilton, Tuckahoe won their share of Gold Balls in this era and are well represented below.

Before we reveal the brackets, a look at the rules, format, and how the field was determined for each class:

Now that the rules and format are all mapped out, here are the brackets for each class:

* – Won Class D title; Class C champions from 2000-2003 will be included in our Class B SuperBracketology tournament

2020 Hamilton (20-3): Nobody got robbed of the state tournament more than this team, which was primed to make a long run behind its stars Brandon Harris, Jourdan Belcher, Jaylen Savage and Tyshawn Herring.

2012 Tuckahoe (25-0): The undefeated state champs were sensational every step of the way. You could make a case that Sky Williams had the best individual season of any player in the section in the past decade. And Justin Nolan and Shyheim Nixon comprised a strong group around him.

2004 Blind Brook (21-6): This was a team that hit its stride in the second half of the season and never slowed down. Tom Wethington, Chris Stockel, Steve Gross and Michael Bennett clicked in the playoffs.

2004 Hamilton (21-4): The state champion Red Raiders were a fearless group that was built to win it all. Jim Redd was a dynamic scorer, Brent Paladio ran the offense, Michael McDuffie and James Penn were terrific inside and Rashawn Dubois was the versatile threat on both ends of the floor.

2000 Haldane (16-5): This was the same group that won a section title the following season with Joe and Tom Virgadamo, Ryan McConville and Chris Anderson.

2000 Tuckahoe (18-5): It was an ugly championship game but this Tigers group had every opportunity to win the title. They fell to Hamilton 39-36 in the final.

2001 Blind Brook (20-2): A string of disappointing finishes for the Trojans were about to end in 2002. But this group, with underclassmen Jason Stein and John-Michael Grzan, won 20 games and played in a championship, losing to Haldane.

2005 Blind Brook (19-5): This group had several holdovers from the state championship squad, including Steve Gross. But they were upset in the semifinals of the section by Lincoln Hall.

2005 Croton-Harmon (17-6): The Tigers were blessed with a prolific scorer in Nick DiMaggio and a towering inside presence in John Scwamb. But they couldn’t handle Lincoln Hall, a first-year program, in the title game at Pace. The signature moment for this group was an unthinkable 17-point comeback in the section semis to beat Tuckahoe.

2010 Valhalla (17-4): The reigning champs returned two elite conference players in Dan Annunziata and forward James Jensen. The talented squad was knocked off by Blind Brook in the section final.

2013 Children’s Village (19-2): This team was poised to return to the County Center after losing to Tuckahoe the previous season and compete. Andre Jones was a gifted scorer but CV didn’t have enough to contend with Pal Prep in the title game.