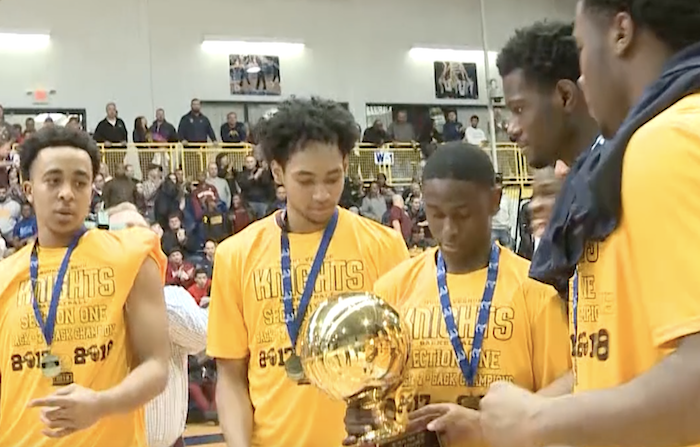 Ramapo, the highest seed to ever play for a Section 1 championship at No. 18, had travel restrictions bus following Friday’s storm, preventing them from driving over the Tappan Zee Bridge. The team bus instead had to go over the Bear Mountain Bridge, forcing them to arrive at Pace University for the Class AA final an hour later than expects.

Mount Vernon was there waiting. And the Knights were ready.

“Ramapo was having a great season and was playing really good basketball,” Douglas-Stanley said. “We had a good scouting report coming into the game. We knew that if we worked hard in practice and executed, we should be ok.”

“We got another Gold Ball home. This is my third,” said Douglas-Stanley, who’ll play next season at George Mason. “We are going to celebrate this but we want to get back to states. This is a nice accomplishment. But we want more.”

Mount Vernon will next play on Friday at Pace University in the NYSPHSAA Class AA regional championship. The Knights will face either Section 9 champion

Ramapo’s incredible run to the Section 1 title game won’t soon be forgotten. I detailed it all here as the No. 18 seed pulled off three road upsets and a jaw-dropping OT win over Mamaroneck in the semis at the County Center.

First round: Ramapo stuns No. 2 Clarkstown South (story and video)