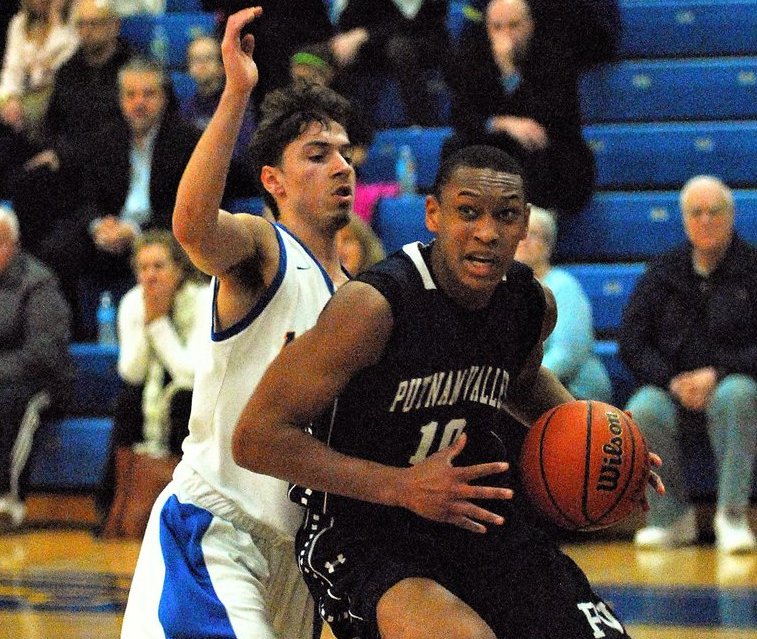 Putnam Valley was less than a minute away from losing its first game to a Section 1 opponent in 2018. The scenario: at home against Ossining and trailing by four points with 20 seconds to play.

Then came this sequence, captured by John Taboada (@J_Tabs):

Down 4 with 20 seconds to go, @PVAthletics1 goes on 6-0 run to close the game, and stun Ossining at home.. @KDJmedia1 pic.twitter.com/dROshHDIrZ

It started with Darnel Shillingford draining a 3-pointer to pull within one. Then a turnover off the ensuing inbound seconds later forced by T.J. Brescia. Austin Fabiano hit the first free throw but missed the second. He missed the second but Shillingford crashed in for the rebound and putback with 6.3 seconds.

That proved to be the difference in Put Valley’s 45-43 win, marking their eighth straight victory and ninth in a row against Section 1 competition. Put Valley improved to 15-2 overall — clinching at least a .750 record and second Bonus Point for opponents — and, with Irvington’s loss to Panas, moved closer to securing the No. 1 seed in the Class B tournament.

Brescia had 20 points and Shillingford had 12, five coming in the final 20 seconds.

Briarcliff continued its mastery of Pleasantville on Monday, grinding out a 45-35 win on the road in a rematch of last year’s Section 1 Class B final. The Bears have now won 13 out of 14 meetings in the rivalry. The lone loss? Last year’s section final.

Jackson Gonseth had 16 points and eight rebounds for Briarcliff, which overcame an aggressive and physically punishing Pleasantville squad. Myles Jones had 10 points, seven rebounds and five steals in the win as the Bears moved to 14-4 overall and 12-4 in the section.

The game was broadcast by Verizon Fios and will air on Fios Ch. 1 on Friday at 7:30 p.m. Highlights from Fios here:

Briarcliff, which sits at the No. 4 slot in Class B Bracketology, will host Pleasantville on Friday in the season finale for both squads.

Prior to the game, Pleasantville unveiled a banner to honor the nine 1,000-point scorers in school history. Five of the scorers were in attendance, including all-time girls leading scorer Maggie Bramswig, 2017 standout Mike Manley, and the program’s most acclaimed player, Otis Hill (who played at Syracuse).

1. Bill Murphy takes steps to clear name. When Bill Murphy (photo above) and Scarsdale basketball parted ways on Friday (was it a resignation or firing?), there were far more questions than answers about the situation. Murphy attempted to answer questions and speak directly to community members during a Town Hall discussion at Willow Ridge Country Club in Harrison. Murphy mainly had supporters in attendance. An article published in the Scarsdale Inquirer on Monday by Todd Sliss gave serious insight to the situation. Read it here.

Watch the News 12 story and interview with Bill Murphy here

2. Panas keeps finding a way. Last week, following the Panthers’ gritty win at Tappan Zee, I called Panas the most dangerous team entering the Class A tournament. On Monday, they again showed why, taking down a 15-win Irvington squad in another game down to the wire. The 53-51 win was highlighted by 14 points from Brandon Hodge, 12 from Blake Breban and 11 from Brandon Ramos. The win snapped a 13-game win streak for Irvington and extended the Panthers’ streak to nine (and 11 against Section 1 teams). Panas has won six games by five points or less.

3. Alston Tarry is maybe the area’s most underrated player. Bronxville standout Alston Tarry had 23 points in Monday’s loss to North Salem, giving him 999 career points. Tarry is on the verge of becoming only the third player in Bronxville history to top 1,000 career points, which he should achieve on Wednesday against Keio. Tarry would join Pat Dowd (’82) and Tom Priore (’87) in that prestigious group. Tarry has been one of the steadiest scorers over the past two seasons in the section and has put up stellar numbers this season despite being the marked man by every day the Broncos face.

4. You don’t want to play Pleasantville in the postseason. Yes, it is a rivalry. But regardless, Briarcliff entered Monday averaging 59.9 points per game and were limited to 45 by a team that’s won five games. But Pleasantville isn’t just any team at this point. The football players on the roster, four of which are starters, have taken time to get their legs back. And had they not shot 3 for 20 from 3-point range, this could have been a different game. It’s a longshot for the Panthers to repeat as champs. But they should could upset any team in the bracket on the right night.